Not only is Bill Johnston, chief community officer at ForumOne Communications, a good friend, he’s also one of the best kept secrets in the world of social. When I tell you that Bill is one of the most knowledgable people in the space when it comes to online community, I’m not pulling your leg. In addition to overseeing Autodesk’s online community in a previous life, Bill now runs a community of communities at ForumOne with member companies like eBay, Apple, Yahoo, Microsoft and Sony (heard of them)?

In case you needed another reason to like Bill, he’s also a great business partner. Over the past few years Bill and I have worked together on a number of different events 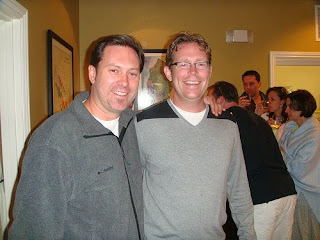 and I can tell you that he is as fair as they come. Oh yeah, Bill also lives in So
noma, CA so he’s a good guy to know when it comes to things like 40th birthdays. To that end, I couldn’t resist including at least one of our pictures of Bill and me out with the rest of my friends and family that joined us for a wine country tour de force last October.
But enough about wine… off to Bill’s answers to the Experts in the Industry series:
In one sentence, please describe what you do and why you’re good at it.
I bring people together (online and in person) to collectively gain a better understanding of developing and growing online communities. I think I’m *pretty* good at it, but as a consequence of my work, I’m constantly humbled by the other practitioners in the space that I meet. I love working on community strategy and development, and I think that makes the difference… as hokey as it may sound, I really do love it.

How did you get into the world of online community, social media or social marketing?
I was employee #20 at TechRepublic.com (1999), which at that time was headquartered in Louisville KY. I have to admit that at first I didn’t really appreciate the “community” aspects of the TechRepublic community. Then one night I started following a thread between two WIndows NT admins – one in the states and one in Latin America. They were helping each other troubleshoot a really obscure configuration issue, and it dawned on me: We brought together two out of probably 20 people in the entire world that were capable of discussing and solving that particular problem. From that moment on, I was hooked.

If you had $10 million to invest in one company and one company only based on their use of “social,” which company would it be and why?
Seriously? One that I would start. There are so many problems to solve and so many opportunities.

Which business leader, politician or public figure do you most respect?
Let’s just assume that Obama, Gore, et al. are in my top 5. How about #6 on my list? My wife is looking over my shoulder, so I’m going to say Oprah. Ok, now she’s gone. Although I love the media empire Oprah has created (I would love to become MOprah, or Man Oprah), I’m going to go with Richard Branson. He’s fearless, funny, innovative and always recovers from failure with a smile on his face, and he has driven the Virgin brand in many places (health, space, cola?!?) that it probably shouldn’t be, but it is successful nonetheless.

Would you join a toothpaste community? Why?
No, but I *might* join a health community that had a dental health section. It’s hard to get excited about toothpaste, but easier to get excited about the good health in genreal, and (maybe) dental health. I think that is the problem with a lot of community and social media strategies… thinking in isolation vs. thinking holistically.

Freeform – here’s where you can riff on anyone or anything – good or bad. Or just share a pearl of wisdom.
Some pearls for the aspiring online community or social media strategist: