As Jennifer and I close in on our year anniversary for the Quick’n’dirty podcast show (Our first show was June 3, 2009), we were particularly proud to announce that friend, Rich Harris of Seagate, had joined our team as the show’s producer. During the last few minutes of the show (replacing our normal “point / counterpoint” discussion), we talked with Rich about some of the ways he’d be helping out with the Q’n’D crew. All I can tell you is that it’s only been a little over a week and Rich has already paid for himself — okay, he’s volunteering for the job, but still. 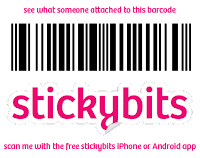 As usual, we kicked the show off with our social app of the week. This time, it was old world bar codes meets new world social web, with innovative startup, Stickybits. The simple way to think about this is being able to connect offline posters, signs, etc. with the online world via a barcode stick on an an iPhone. Jennifer spent a little bit of time giving more detail on how this works but you can also see TechCrunch’s write up on Stickybits here.

Next up was former “Twitterer of the week,” and this week’s special guest, Lon Cohen (@obilon on Twitter). In addition to being a writer, Lon is also the director of online and social media at the New York chapter of the ALS Association. Given the fact that we’ve spent a lot of time interviewing folks from big brands or for profit startups, it was nice to get the POV from a not-for-profit using social to advance their cause. During our talk, Lon discussed some of the challenges (and benefits) of doing social at a non-for-profit including small budgets but greater good will. Obviously, Lon’s wisdom can benefit anyone who is trying to do social for an organization but other non/not-for-profits would do well to give his section of the show a listen.

Last up on the show was our featured Twitterer of the week (“we love your tweets” as Jennifer would say). This week’s TOTW was none other than Lee Odden, CEO of Top Rank Marketing. While hardly a best kept secret, he’s too smart of a guy and too much of a gentleman for only 20,000 people to be following him.