One may not seem like a powerful number… but it is. Like the well-known Pareto Principle (or 80/20 rule), there is another semi-universally accepted theorem about the ratio of content creators to commentors to lurkers. This is the 90/10/1 or 1% rule. Author and friend, Jackie Huba, has talked about this rule a number of times, mainly in the context of what companies and organizations can expect when it comes to expected contribution rates in social networking activities and online community.

What got me thinking about the power of one the other day was a graphic created by eMarketer that appeared in a post titled, Why should brands bother with twitter? This table says why. I’ve embedded the table below for ease of reference but one can pretty quickly see that when it comes to engaging in social activities, people that use Twitter over index off the chart. 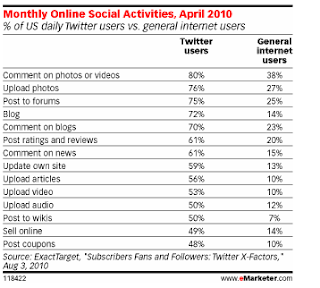 Upon tweeting about the “Why should brands bother” post, my friend, Liz Phillips, chimed in… 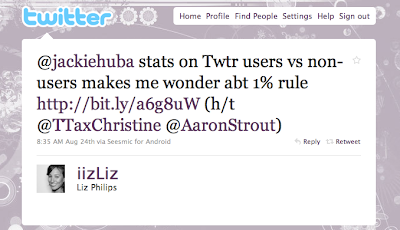 Wow, could this be true? Obviously there is some self-selection because people who tend to be hyper-social also tend to be on Twitter. But looking at the chart, the difference in “social activities” between Twitter users and ordinary internet users is 100-400% greater. Jackie Huba (who I mentioned earlier as being a pro on this front) clarified that most of the research around the 90/10/1 ratio has been focused on online community which is important to keep in mind. But might this number be shifting?

In thinking about the numbers and what looks like a dramatic shift in the 90/10/1 rule (which is different for social media than online community), one explanation for this might be what I’ll call “the Facebook” effect. With 50% of Facebook users (now over 500 million) logging on to the service at least once a day for at least an hour a day, the general internet population is getting more comfortable and familiar with the idea of posting updates, links, pictures and video while also commenting and “liking” friends and colleagues content.

Getting back to Twitter, one thing that has always bothered me, especially when it comes to discussions around following to follower ratio is how many of the people I’m connected with actually tweet. I follow over 12,000 people and you might be surprised to know that I receive no more than 10-20 direct messages (DM’s) a day and those are mainly from close friends and contacts. I also suspect (although I have no direct evidence) that out of the 12,000 people I follow, somewhere south of 20% constitute 80% of the updates (there’s that 80/20 rule again). With 14,000 plus people following me on Twitter, I’ve also wondered how many people are actively monitoring my tweet stream. My guess is maybe somewhere around 1% at any given time.

To validate this number, I took a very unscientific approach. Last night while sitting in traffic (yes Oprah, I was at a complete stop when I tweeted this), I put out this tweet… 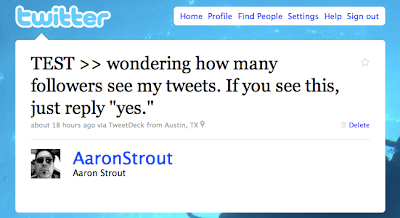 And then I waited… for 12 hours in fact before putting out another tweet. At least 50% of my responses came back in the first hour with the remaining 50% trickling in over the next 11 hours. The number of respondents was 78 (two coming via DM). As a funny side note, many people followed the rules and gave me a straight “yes” but several people got creative and a few even included one of my favorite lines, “I see you” in their response. Doing a little back of the envelope math, 78 responses is a little more than .5% of the number of people that follow me. Taking some statistical liberties, I’m going to estimate that the number of people who responded to me represented 50% of those that saw my initial tweet (the other 50% thinking, “why should I waste my time responding to you Strout.”) Guess what, if you double that .5% [drumroll please]… yup, you get 1%.

What does this mean? To be honest, I’m not sure. Except that there is a power in numbers. Whether it is 80/20 or 90/10/1, it shows that behavior can be predictable. What I’m more interested in seeing is whether my theory about the Facebook Effect really has legs. If anyone has any research on this front, I’d love to hear about it. In the meantime, if you have a different theory OR would like to dispel any of my VERY unscientific research, please feel free to do so in the comments below.

I would love to send a HUGE thank you to my friends who (at least some of the time) pay attention to what I have to say. Most of you are already in my “Trust Tree” column on Tweetdeck ensuring that I am more likely to see your tweets versus those in my general “friend” stream. For those of you that weren’t, consider yourself added (see, it does pay to play along sometimes). The folks that participated are: