That’s one of my favorite lines from the Movie Stripes (yes, I’m that old). The quote was from an overweight John Candy who had just joined the army. His goal of course was to become a “lean, mean, fighting machine.” Well, that’s my goal too. Except for the fighting part. But you get my drift.

So why am I exposing my chest and underwear to you? For two reasons. One, I’m proud of the fact that after many years of being fit and trim… and then letting my younger children and two startups… get the better of me… I’m now down 15 pounds from my high water mark of 227 pounds. Yes, as you can see I still have a little ways to go but I am much happier at 212. And my goal is to be closer to 205 or even 200.

The second reason I’m exposing myself is because my friend, Simon Salt (who is working on a transmogrification of his own) pointed me in the direction of an amazing woman named Mish G who has started a movement called — you guessed it — the Exposed Movement. What’s cool is that Mish has gotten over 100 women and men to expose themselves. And to face up to the fact that very few people have perfect bodies. To that end, we can either loathe ourselves our love ourselves. Mish and her community have obviously chosen the latter. And so am I. 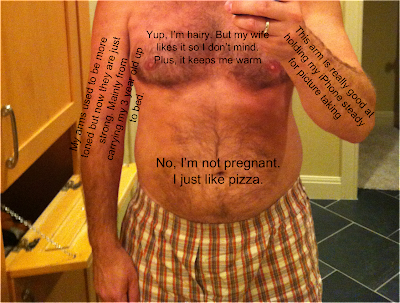 Here’s most of me. And with any luck, in another 4-6 weeks, you’ll see an updated picture of an even slimmer Aaron. In the meantime, I’m going to keep eating right, exercising and loving what God gave me. How about you? Will you join the movement?