Writing a book is tricky business. I know because I’m in the process of doing so as I write this post. Marketing a book after it’s published can be equally difficult for a few different reasons:

For me, I’ve had the benefit of some past, present and soon to be future experience with book marketing. In the latter case, I’m the one writing the book. In the former instances, it was a boss or a colleague that wrote the books and I’ve been on the hook to help them get the word out.
In the spirit of being prescriptive, I’m including a “what worked, what didn’t and what I would have done differently” for the past and present books I helped market. In the case of my Location Based Marketing for Dummies book that I’m writing with my friend, Mike Schneider, I’ve spelled out a few things that we hope will work based on past experience. I also have a dozen or so friends that have written books and I’ve included a few at the end of this post that I think did a good job marketing their respective books.

The Past
Back in 2006, not a lot of people knew about social media. In some ways, this was a good thing. In other ways, it made marketing a book about social media (or more specifically, using a community of people to crowd source a book on a wiki platform) that much harder. The book I’m referencing was cleverly titled, We Are Smarter Than Me, and was a collection of case studies provided by “the crowd.”

The Present
During my tenure here at Powered, I’ve actually had the benefit marketing two books. One by my colleague, Joseph Jaffe, titled Flip the Funnel, and a second by colleague, Greg Verdino, titled microMarketing. Because the promotion of Greg’s book is more recent, I’m going to focus on that one versus Joe’s.

The Future
As I mentioned earlier, I’m co-authoring a book titled, Location Based Marketing for Dummies. In the plus column, this is a book that is part of a well-known series that our publisher, Wiley, has been supporting for years. It’s also focusing on a topic that is near and dear to my heart. At the same time, I know there are people with a natural bias against Dummies books and while I’m thrilled to be a part of it, it’s definitely not the same as writing a book from scratch. But with that said, I do plan to market the hell out of it starting now.

So who are a few of the other authors who have done a great job marketing their books? Here are five (if you want to know why, you have to ask me in the comments):

Okay, when I say “we’re writin’ a book,” it’s a Dummies book. Which of course is a real book. But it’s not like we’re creating the next great American novel. More specifically, the “we” is my good friend and geo-location savant, Mike Schneider and me. And the Dummies book (Wiley imprint) we’re writing is Location Based Marketing for Dummies. To my knowledge, it will be only the second printed book on this subject. Our friend, Simon Salt’s book being the first. 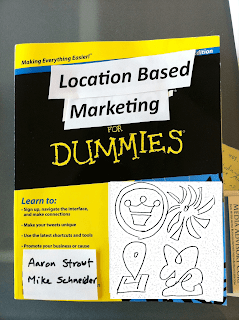 In the book, we plan to cover a broad array of topics including:

Mike and I have started writing the book already and plan to have the book wrapped up in March of 2011. The book is scheduled to be published in June of 2011. God willing, we’ll start the pre-orders around May. As soon as there is a link up on Amazon and Barnes and Noble, we’ll be sure you know about it.

By the way, I’d like to give a special thanks to our acquiring publisher, Amy Fandrei. She’s not only super smart but she knows her stuff and has already done a fantastic job at “herding kittens” so to speak. Let’s hope she’s not sick of us by the end of this process.

So How you can help?

I’m glad you asked. If you’re a LBS platform or vendor, we are interested in access to your executives, platform and case studies. If you see a new LBS hit the scene, send @schneidermike and I a tweet with the hashtag #LBM4D. You can also keep checking in and letting us know if you discover cool offers, glitches, Easter eggs and any other LBS topics that might be noteworthy. Tell us if you have specific things you think the book should cover, we are always listening.

And of course, you can read the book!