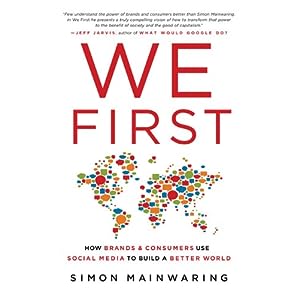 Tomorrow, my friend (and someone I greatly respect), Simon Mainwaring will be making his second appearance on the Quick’n’Dirty podcast show. Unfortunately, I have a client offsite that will prevent me from being in on the interview but with regular co-host, Kyle Flaherty and guest co-host (and colleague), Greg Matthews, Simon will be in good hands. One thing to note and that is that Simon is our first official guest to have been on the show two times. There are a couple of reasons for that:

Simon was kind enough to send me a few bullets about the book down below so those of you interested in the book (that should be all of you) know what it’s about. I’ve also embedded a recent video Simon did for the book. Hopefully this will reinforce why you’ll want to read the book.

By the way, I get NOTHING for writing this post and have not received a free book. I am doing this because Simon is one of the nicest/smartest/well-spoken guys out there. Too often we do disclosures because there is a possibility that we’ve been tainted or influenced in some way. In this case, I can only say I’m influenced by the fact that Simon just does things right.

The Quick’n’Dirty Social Media Podcast kicks off today at 3 p.m. PT / 6 p.m. ET. As I wrote a couple weeks ago, this project is a joint one withAaron Strout, and it came about after a dinner debate in San Francisco. We’ll be doing all kinds of fun stuff — point / counterpoint, case studies, highlighting lesser known social networks, spotlighting cool members of the social media community, and we’ll even have regular guests. Our first show is going to be a little less formal since we want a chance to play with the format and get some feedback, so we won’t have a guest this week. But we will have other fun stuff.

Speaking of fun stuff, we’d also hosted a two-week long logo design contest. Well, you see the logo above. We love it! Big thanks to Kenneth Lim who designed the winning logo. He went above and beyond and gave us several options, and the design was so clean and fun that we had to go with it. Kenneth has won the following:

I am sure we will do other giveaways and prize incentives in the future, so be sure to listen to the podcast. The BlogTalkRadio link is here. Will you join us?