It’s been exactly a week since South by Southwest Interactive (SXSWi) and I’ve had a little bit of time to let the dust settle. While this was definitely the most stressful of the three SXSWi’s I’ve been to, it was also the most professionally rewarding. Yes, you heard me right. I actually had a good time at SXSWi AND found value unlike others who complained that it’s become too big, too commercialized or too whatever. Rather than pile on, I’ll let my friends Kyle Flaherty and Jessica Smith and sister, Heather Strout’s posts speak to this point as they’ve really covered all the bases. What I would like to cover in my recap of my experience at SXSWi are five things. I’ve bulleted the items below so you can focus on the areas you care about and skip the “who gives a shit” stuff.

SOCIAL BUSINESS SUMMIT
Fortunately or unfortunately, I was not able to attend very many panels this year. Believe it or not, it was not a lack of want on my part but rather a lack of time (thus the stress) between meetings, briefings, client events, prospecting, etc. I did have the good fortune of sitting on two panels this year (more on that under bullet three) and did get a chance to catch my friend / mentee, Sydney Owen’s panel, “GenY Wants to Work with You, Not for You (my friend, Elysa Rice was also on the panel — both did a wonderful job). I also caught the first half of Twitter founder, Evan Williams’, keynote. Like many folks, I was underwhelmed but found a little additional value in moderator, Umair Haque’s blog recap/apology.
The reason I’m providing this prologue is that I didn’t feel as bad about not attending panels during SXSWi because I had a day of great inspiration on the Thursday prior. (A big thank you to Peter Kim / Jeff Dachis for inviting me). You can visit the agenda to see a list of all the speakers and topics but the highlights for me were the breadth and depth of what was covered. In particular, I really liked Charlene Li’s (Altimeter Group) talk on open leadership, Jaime Punishill’s (Citi) discussion of operationalizing social, Kate Niederhoffer’s (Dachis Group) primer on social psychology,  Frank Eliason’s (Comcast) focus on social’s impact on cultural change and finally Jackie Huba’s (Ants Eye View) highlighting of why the “one percent-ers” matter. Don’t get me wrong, all of the speakers were fantastic… these just happen to be the handful that really stood out.
LOCATION-BASED SERVICES

One of the biggest takeaways for me at SXSWi is that location-based services like Foursquare and Gowalla are here to stay. Those two may or may not be the dominant players in the long run (I like both companies but my money is on Facebook for winning this game in the long run) but they definitely got their day in the sun at SXSWi. Author, Alan Wolk and 140 Conference founder, Jeff Pulver, shared some interesting thoughts here and here on what LBS lack and why they played a bigger role at SXSWi than Twitter.

As someone that’s spent more time than is healthy experimenting with location-based services — I started using Brightkite in early 2008 — I had the opportunity to experience the good, the bad and the ugly of Gowalla and Foursquare during SXSWi. For one, Gowalla and FourSquare helped me find out where the best panels, lunches, dinners and parties were during the conference. In particular, a simple check up on the whereabouts of Mssrs. Chris Heueur, Brett Petersel, David Armano or Robert Scoble more often than not let me know where the action was.

Using FourSquare and Gowalla was also particularly useful in trying to track down friends and colleagues when we got separated (which happened fairly often). Lastly, I was also able to figure out who was in the blogger’s lounge at any given time (to that end, big ups to Porter Novelli, TechSet, Brian Solis, Stephanie Agresta and Windows for making the BL possible). The Bloggers’ Lounge continues to be one of my favorite places to hang out during SXSWi. 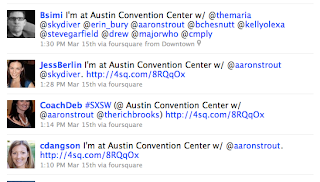 On the bad/ugly side of LBS, there are privacy issues that are starting to arise. For one. FourSquare has developed a feature that automatically includes other “friends” that are checked into a common location when a user decides to cross-post on Twitter. Normally, this is no big deal but increasingly is starting to cause confusion or even trouble. As an example, think about this use case… I check into the Iron Cactus for lunch. As the day wears on, I get caught up with work and forget to check into another location. At 3:30, a female friend that I’m connected with on FourSquare checks into the Iron Cactus and says “doing tequila shots.” The problem is, unknowingly the aforementioned female friend’s tweet might look something like this, “@SusieQue is doing tequila shots w/ @aaronstrout at Iron Cactus (225 Fourth Street http://4sq.com/4r8adF).” While I may, or may not care
whether I’m being accused of doing tequila shots, if my boss and/or wife are watching Twitter, they might see this tweet and wonder, “what the hell is Aaron doing with Susie Que at 3:30 in the afternoon when he should be working?

On a side note, one of the bright spots of SXSWi for me was a social network / platform called Plancast. I covered this with my podcast partner, Jennifer Leggio, a few weeks ago on the Quick-n-Dirty podcast show and will be interviewing their CEO, Mark Hendrickson sometime in April. Even if you are not socially inclined, it is a great way to discover events (and keep track of events that you have signed up for). You can also find out more from the interview that my friend, Simon Salt, did with Mark here.

SPEAKING AT SXSWi / GETTING ON A PANEL As I mentioned earlier, this was my third year attending SXSWi. My first year here, I was just in awe of actually coming and did not submit for any panels. For 2009, I submitted for a panel that made it all the way to the finals before being nixed. And then there was this year. I only submitted one panel and that was on behalf of my colleague, Kathy Warren. It was to include Kodak client, Tom Hoehn, and friends, Shawn Morton of Nationwide and Peter Fasano of Coke. The focus was how businesses were generating ROI using social (I mean, who would want to see that panel, right?) Unfortunately, that panel did not make the cut but my friend, Tim Walker’s panel on using sports metaphors in social did. I was also lucky enough to be asked to join a panel on Digital Identity Theft by my friend Beth Gwazdosky at CSIdentity. What’s the moral of this story? One, it’s an arbitrary process from what I can tell and two, make friends with people who have a good shot of getting their panels approved. Oh, and keep trying because as frustrating as it is to submit and fail, you don’t have a shot (unless you’ve got the right friends) unless you try. For summaries of the Digital Identity Theft panel I did with Bill Morrow, see my sister’s post (referenced earlier). My friend, Christine Major, did a nice wrap up of the sports metaphor panel that Tim and Kyle Flaherty were kind enough to include me on.

As they say, a picture is worth a thousand words and that couldn’t be more true when it came to this year’s photo meme. For those who are wondering “what’s up with the gnome,” the short version of the story is that my good friend, Jim Storer (the photographer responsible for many of the photos in this post) decided to start a photo meme last year called, Sad, Mad, Glad. This year, our goal was to one-up that meme so we solicited suggestions from Twitter. Former colleague, Susan Koutalakis, teed up the idea of taking pictures with the Red Sox Gnome ala Travelocity. I’ve included a few of my favorites below but be sure to head over to Jim’s Flickr stream to see all the victims participants in the meme. I could wax poetic on this last topic for a while. But I won’t. Mainly because I don’t want to reinforce the perception that SXSWi is all about the parties. Don’t get me wrong, there are A LOT of parties. But for anyone that really “gets it,” you realize that the networking is what’s important and that can happen in a number of different ways including breakfasts, hallway conversations, the Blogger’s Lounge, car rides to the Salt Lick, etc.

With that said, here are my five favorite parties/events from SXSWi in no particular order: So that’s a wrap. Longer than I wanted it to be but missing a bunch of things I wanted to talk about. Isn’t that always the way. An additional shout out to some of my peeps that I hung out with during SXSW including: Joe Jaffe, Doug Wick, Bill Fanning, Sydney Owen, Mason Nelder, Zena Weist, Adam Cohen, Selina McCusker, Zane Aveton, Bill Johnston, Jaime Punishill, Anna O’Brien, Frank Eliason, Deb Micek, Aaron Brazell, D’Ann Faught, Alexa Scordato, Keith Burtis, Rocky Barbanica, Brett Petersel, Reem Abeidoh, Heather Elias, Hadley Stern, Martha Hayward, David Smutek, Liz Phillips, Marlooz Veldhuisen, Jeremy Tanner, Maria Ogneva, Greg Narain, Ginger Wilcox, Derek Overbey, Andy Kaufman, Jeremiah Owyang, David Berkowitz, Maggie Fox, Lionel Menchaca, Greg Matthews, Shawn Morton, Chuck Hemann, Bryan Person and about a thousand other people I’m going to piss off by not mentioning here.
Special thanks to Jim Storer for being my partner in crime and making the conference incrementally more fun with all his awesome photos. And special, special thanks to my loving and supportive wife, Melanie and my three awesome children for letting me be an absentee husband/dad for nearly six days.

With a nod to dystopian classic, Animal farm, you may have heard the quote “all [clients] are equal, but some [clients] are more equal than others. To that end, our newest client, VeriSign (the company best known for doling out “dot com” or “dot net” domain names), happens to fall into the “more equal” category. So it shouldn’t surprise you to hear that they chose to kick off an exciting project at the event that has been dubbed by outsiders as “geek spring break” aka SXSW Interactive.

Which project you ask? Well, let’s just say it involves creating awareness around the .tv domains — considered less valuable in the past — to meet the growing need of video creators (like my colleague, Joe Jaffe) to showcase their stuff. Seriously, this is a perfect way whether your an individual or a company to showcase your commitment to video. Rather than hunting and pecking, customers/fans searching for video content can simply replace the “dot com” or “dot net” at the end of your URL and immediately see all of your video content in a single view.

To help generate excitement and education around this new initiative, the Powered and VeriSign teams have created some fun activities over the next few days to help you get started if you’re new to video or get seen if you’re already a video maven:

Special thanks to my friend and colleague, Greg Verdino, who let me — willingly or unwillingly — “borrow” some of his images and bullets for this post. You can read his more eloquent post on this topic here.