Last night, I got a direct message from my friend, Mike Volpe, who is the VP of marketing at Boston based company, Hubspot. In his DM, Mike was letting me know that Hubspot would be releasing an informative report this morning on the “State of Twitter.” If you use Twitter as an individual or a business, I would highly recommend that you check out this report as it is chock full of valuable and informative statistics.
With that said, I’m actually not going to write abou the report. ReadWriteWeb and Techcrunch along with many others have already covered that angle (some before Hubspot was ready). Instead, I want to talk about what Hubspot does well. The have learned the incredibly important lesson of “give before you get.” Just take a look at their site which includes freebies like:
With that said, I have to admit that I was a little skeptical of Hubspot CEO, Brian Halligan, when I first met him several months ago. We were on a MITX panel together along with Chris Brogan and Chris Penn. During the panel, I could tell immediately that Brian was smart and that he got it but I wondered if he might be too far over on the dark side of “using” social media for business. Based on subsequent conversations with Brian and Mike along with watching how Hubspot behaves in the social media “sandbox,” I not only discovered that I was wrong about my initial assessment but also that Brian, Mike and team were in fact REALLY good at tying business goals together with social media outcomes.
I was reminded of my admiration for Hubspot the other day during a webinar I did with Ann Handley of Marketing Profs and Jeremiah Owyang of Forrester. One of the slides in Ann’s portion of the presentation — focused on creating great content — mentioned Hubspot (see below). Between that mention and Mike’s DM last night, I felt compelled to give Hubspot a Stroutmeister “shout out” (that’s a reference to my blog vs. me talking about myself in the 3rd person btw). 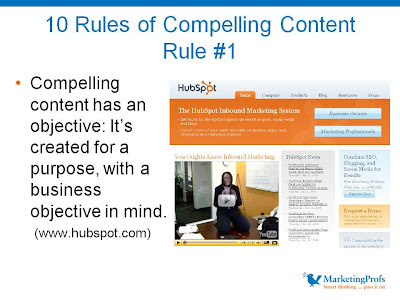 To that end, what other companies are doing a great job creating content and sharing it freely with their consituents? I’m always looking for companies to write about, interview or invite to join me on panels etc. If you know of anyone, DM me or leave a comment in the space below.