As an iPhone user, I’ve always been a bit annoyed by the way it handles voice calls. Up until recently, I was definitely an apologist explaining to my friends that had Blackberry’s and other phones that, “yeah, AT&T;’s service might not be the best but 1) I don’t talk on the phone much and 2) the iPhone’s form and functionality more than make up for that fact.” After experiencing more than 20 dropped calls during the last couple of weeks here in Austin, TX, I’m not so sure. 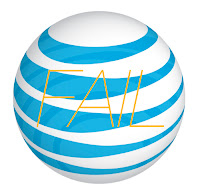 It’s no secret that AT&T; is an anchor around Apple’s neck on the iPhone deal. [sidebar, if you haven’t read this post by Fake Steve Jobs, it is pee-your-pants funny — warning, it contains some foul language]. Yes, they may have been the only carrier big enough at the time to handle the iPhone’s data needs but since then (hello 4g on Sprint), Apple’s deal with AT&T; is looking more and more albatross-like every day… to the point where I am considering buying a different device (gulp). Yup, I just said it.

In addition to the obvious annoyances that I’ve mentioned above, there are a few things that are driving my willingness to consider a different smart phone. For one, I keep asking myself why it took three years, an embarassing shit storm in New York, a failed multi-million dollar advertising response to Verizon’s virtual “pants-ing,” and thousands of daily mentions of how much AT&T; sucks to realize that maybe they should spend some money and actually fix the problem at hand. I also can’t help but wonder why they’ve yet to really embrace social media when that could go such a long way to help change their perception in the marketplace.

Who knows, maybe I’ll stick with the iPhone in spite of the ongoing dropped calls. But probably not. I’ve already agreed to test out Sprint’s new Samsung Moment. And if that doesn’t take, Google’s Nexus One could be in my future. While I love my iPhone, I think the only thing that’s going to save it is if Steve Job’s can wiggle out of his contract and strike a deal with Sprint or Verizon. Otherwise, I’m not stickin’ around.