Last night, a Twitter conversation between David Armano (SVP of Edelman Digital), Brian Morrissey (digital editor at AdWeek) and me about the disparity between mainstream media and the social web got me thinking about the future of journalism. Our conversation was sparked by a recent report conducted by the Pew Research Center’s Project for Excellence in Journalism (via this blog post).

The report itself is a good one, however, there was one point that stuck in my craw a little bit (and I think David’s as well):

While social media players espouse a different agenda than the mainstream media, blogs still heavily rely on the traditional press — and primarily just a few outlets within that — for their information. More than 99% of the stories linked to in blogs came from legacy outlets such as newspapers and broadcast networks. And just four — the BBC, CNN, the New York Times and the Washington Post accounted for fully 80% of all links.While I don’t disagree at all with the concept that social media relies heavily on the same four legacy outlets for source material, this doesn’t mean that social/new media can’t or won’t survive without these traditional media outlets.

What I will concede is that IF traditional media were to die — something I don’t think will ever happen — we would fair just fine. The biggest shift in my mind would be a need for better filters that would help us collectively sort through the wheat and chaff. This likely is some combination of human curation and a variety of technologies relying on collaborative filtering and natural language search.

With that as a backdrop, here are my five thoughts on the future of journalism. 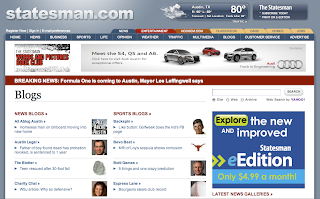 I’m quite sure I’m missing a bunch of hot topics here but this should get some of the creative juices flowing. Where do you see the future of journalism headed? Join the conversation in the comments below.