If you follow my Twitter stream or listen to my weekly podcast, you’ll know that the question of whether I think FourSquare and Gowalla are shiny objects is a loaded one. Of course I am bullish on the value location-based services like FourSquare, Gowalla offer large and small businesses alike. Truth be told, however, I’ve had a hard time telling clients and prospective clients alike that it’s time to go guns a blazing with location-based services for two reasons: 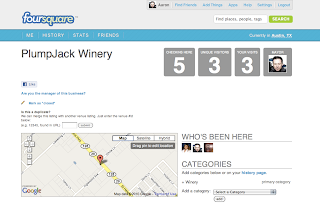 With that said, that doesn’t mean that I don’t think companies shouldn’t be starting to think about how to incorporate location-based services into their marketing and social media mixes. Fortunately, there are a number of big brands that are already starting to test location-based services (more FourSquare than Gowalla). TO that end, I’ve provided a list of the companies experimenting with Foursquare below [list is courtesy of David Stutts with a hat tip to the folks at SocialPath for pointing this work out).

And here is the presentation on SlideShare that David put together. Click through to get the details on each program.

Loyalty
At the end of the day, location-based services like FourSquare and Gowalla are ultimately going to be best at creating long-term loyalty with existing customers. Companies like Tasti D-Lite have started to figured this out by feeding their reward programs through point of purchase experiences which in turn check users into social sites like Twitter and FourSquare. And when a customer checks in, he/she earn points toward free food/drinks.

Let’s be honest, while it’s nice to earn frequent flier or hotel points, the act of earning them isn’t all that exciting. Yet earning bragging rights by becoming mayor or even showing off the fact that you are buying jeans at that cool new boutique downtown is much more fun. As a business, incentivizing more checkins and thus more opportunities to buy stuff and share that experience with your customers’ networks has nothing but upside for your top and bottom lines.

Discovery
One of the things I like most about FourSquare from a personal perspective is the discovery element — both in terms of places and people. As someone that is still feeling his way around Austin, TX, I love watching colleagues like Natanya Anderson (big time foodie), Doug Wick and Kathy Warren alert me to good places to get a meal, watch a game or grab breakfast tacos to go. It’s also useful if I’m at a conference or sporting event to see where my friends are. Even if we’re not connected, many people cross-post their FourSquare and Gowalla status to their Facebook and Twitter pages.

Discovery also comes into play with people. If I’m at my local coffee joint, it’s fun to know who else frequents it. In some cases, it can lead to fun connections that one wouldn’t normally make. As an example several months ago my now friend, Jenna Oltersdorf, noticed that I was the mayor of her local Starbucks. Curious as to who the person was who laid claim to such an honor, she reached out to me via Twitter and asked if I’d like to grab coffee sometime (at that Starbucks of course). In related fashion, my colleague, Joe Jaffe, tells a similar story of him bumping into a prospective customer at a restaurant in San Francisco while seeking out the mayor.

Reach and Referrals
The win here is that while customers are working to accumulate points, bragging rights or free stuff by checking into your store on location-based services like FourSquare and Gowalla, they are also sharing you with their network. Better than that, they are also implicitly (and sometimes explicitly) endorsing you by letting others know they patronize your establishment. Think about the power of running a promotion where anyone that checks into your store more than three times over the course of a month gets a one day discount of 25% off all merchandise. In doing so, you’ve created a reason for customers to 1) visit your store multiple times and 2) let their friends know about it when they do.

Hurdles
Before I get you too hot and bothered, there are few additional obstacles that need to be overcome before location-based services really take off:

Summary
While there are obstacles that could stand in the way of companies adopting location-based services, I am a firm believer that the rewards far outweigh the risks. In fact, if someone were to give me a truth serum and demand that I tell them what the next “big thing” was, I’d be hard pressed to not say location-based services. Don’t take my word for it though. Instead, keep your eye on the twenty companies mentioned in David Stutts SlideShare presentation above and see if they continue to embrace these new tools.
What do you think? Am I living in my own universe? Feel free to tell me how you feel about the future of location-based services in the comments below.