A few months ago I was on a panel at InnoTech with friends Kyle Flaherty, Bryan Person and Sheila Scarborough. The focus of the panel was on the future of social media and one of the topics that came up was RSS. Being the troublemaker that I am, I firmly asserted that RSS as we know it was dead. You can imagine the horror of the 200 plus audience members. 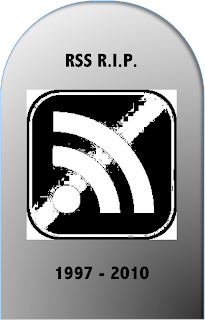 As we dug a little deeper into the topic, I backed off my position and clarified that while I didn’t really think that RSS was dead, I did feel like we were nearing the end of the usefulness of RSS readers. Some of my panelists agreed with me (I believe that Sheila strongly objected) but we were able to have a productive conversation about the increasing value of XML feeds (that’s all RSS really is) while the value of individual readers was on the wane.

Today, the conversation came up again with a gentleman whose shall remain nameless but let’s just say that he is a pioneer in the space and I was pleased to hear that he agreed with me. And while I know at least half of you that read this (all three of you) will insist that you still read blogs regularly via your RSS reader of choice, I’m going to argue that you are a dying breed.

Why do I believe that RSS readers are going the way of the VHS tape? Mainly because they don’t really allow for good curation. And by that, I mean that unless I’m reading an RSS feed of blogs that someone I know and trust like David Armano or Robert Scoble have “read” and “liked,” than I’m forced to do a lot of hunting and pecking. This doesn’t mean I don’t like the blogs of smarties such as Joe Jaffe, Valeria Maltoni, Peter Kim, Jay Baer or Tamsen McMahon. It just means that not all of their posts appeal to me (and I’m quite sure the opposite is true). Combine that with the fact that I enjoy discovering new sources of content — and let’s be honest, there are tons of new content creators coming on the scene every day –and you’ll at least understand where I’m coming from.

Before you say it, I realize that Twitter alone ISN’T the solution to better content curation. In fact, Twitter can sometimes make it harder to find the right content unless you have the right human filters. I find mine in people like Ann Handley, Lee Odden, Steve Rubel, Amber Naslund, Simon Mainwaring, Brian Morrissey, and Rachel Happe among dozens of others. So what is the solution? I’m not sure. A better Flipboard perhaps? A new and improved Delicious? If you know of one, I’m all ears.

Okay, this is the point where I turn things over and let all you folks that are smarter than me tell me the error of my ways. So comment away my friends. You know I love to be proved wrong.