Insanity seems normal when you live in the asylum. Or so I keep reminding myself of the echo chamber that has emerged in our lovely little Web 2.0 world.

The technologists and developers and marketers and bloggers alike love to throw out statistics to prove their little world is the norm. We (and I’m in the middle of it, too) consistently point to the future as being online, connected, mobile or whatever … so long as it doesn’t involve ink or broadcast waves.
But we’re wrong.

Sure, you can throw out Pew Internet and American Life statistics all you want. But you didn’t look them up yourself, have no idea of the context of the questions asked and don’t realize there’s so much missing from the research. 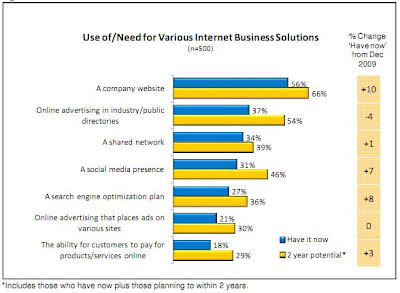 Sure, 79 percent of U.S. adults use the Internet. But the statistic is “use” the internet, not follow you on Twitter. Why aren’t we asking how well they use the Internet?

You know what percentage of the U.S. adult population has broadband in their home? Sixty-six percent. One in three people are still on dial-up, Jethro.

So the social fanatics want to say my doomsday drill down is a myth? Pew also tells us that of the 74 percent of U.S. adults online in 2009, the activities they used the web for were, in order, watching videos; getting information about a job; sending instant messages; downloading music and playing games. And of those, only watching videos was more than half of U.S. adults. Social networking? Thirty-five percent. Reading blogs? Thirty-two.

Now, before you go all math on me and say, “Well, 32 percent of U.S. adults is still like 100 million people.” Sure, but keep in mind you are in an industry that thinks a 2% click thru rate on an ad and a 25% open rate on an email are good. Your logic is that the more bullets you spray, the more unsuspecting consumers you’ll hit.

At a trade show for retailers in a niche industry recently, I spoke with over 150 individuals about digital marketing. One-fourth of them … 25 percent … didn’t have a website. Talking social media to them was like talking retirement when they couldn’t even pay their mortgage.

Think that anecdotal data is misleading? How about the University of Maryland’s Robert H. Smith School of Business’s Center for Excellence in Service State of Small Business Report from January of this year? The study, sponsored by Network Solutions (disclosure: I’m on their social media advisory board), showed that only 56 percent of small business owners currently have a website. (Fourty-four percent of small businesses are NOT online.) Only 66 percent say they plan to in the next two years.
Think that’s a shocker? Would you believe that when asked how often these companies that do have website update them, 41 percent said no more frequently than every 4-9 months. Ten percent said they update them less than once per year.

Social media use? Just 31 percent have a presence now with 46 percent planning one. Flip the notion before you nod in positive agreement: 69 percent of small businesses are NOT using social media.
According to the U.S. Census Bureau there are 1.2 million businesses in the United States with 10 or more employees. There are 4.5 million with nine employees or fewer. Would you believe that 98 percent of business in America are small businesses? (Those with less than 100 employees.)
That’s a big market place of people out there that aren’t checking in on Foursquare, aren’t following you on Twitter and don’t read your precious blog.

There exists a huge gap between those that know the web and those that don’t. And it’s high time we start being honest with ourselves and realize that social media types are not only in the minority, if web usage were religion, we’d be a fringe cult. No, this doesn’t mean the Feds should come blow up our commune. But we’ve got a lot of work to do before real people — those outside the echo chamber — are here to play.

If we don’t start bridging the gap and helping mainstream consumers understand and embrace social media marketing, the dot-com bust is going to seem like a market correction.
So, what are you doing to bridge the gap?