Two weeks ago, I kicked off a photo contest on Flickr. We had about a dozen people participate and those people picked some 131 favorites out of the 5,217 that I’ve uploaded over the past several years. My original goal was to have my friend, Maury Postal (who just had his own gallery showing in NYC), pick the ten winners out of the 131. Unfortunately, after Maury picked his ten it left a three way tie. To resolve the matter I brought in another judge (and master photog) Ken Yeung. What were the results? Well, I now have over 100 photos that are the cream of the crop. Even better, I have twenty pics that have been hand selected by two semi-pro photographers that I trust and respect. This is what we call curation (more on that topic in a future post). As much as I’d like to think that everyone visiting my Flickr account wants nothing more than to see ALL 5,000+ pictures, what they realistically want to see are the best of my photos. And now I can deliver that to them.

Let’s not forget about the most important part and that is the contest winner(s). There were actually two of them: the first was my favorite alien and avid Quick’n’Dirty podcast listener, Howie Goldfarb (aka @SkyPulseMedia). Howie had the most favorites selected (nine out of twenty) but when I went in and looked at how many pictures Howie had favorited during the first phase of the contest, I realized that he may have slightly exceeded the suggested number of ten choices. In the spirit of fairness, I decided that I would split the prize between Howie and Deards whose true identity is yet to be revealed (she picked six of the twenty finalists). That means Howie and Deards each get a $25 gift card of their choosing (iTunes or Starbucks).

Congratulations to the two winners. Thank you to our celebrity judges and a HUGE thank you to you all for participating and making this contest a success. In addition to Howie and Deards, the entrants included: Sheila Scarborough, Jim Storer, Jay Bryant, Darin Kirschner, Steve Golab, Liz Phillips, Tyson Goodridge, Helen Rittersporn and my mom, Martha Strout.

If you’d like to see the winners, the thumbnails are below. Or head on over here to see the final results. 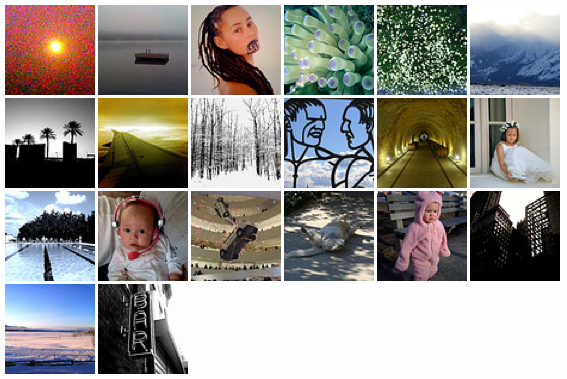 I have a fun contest idea and I need your help. Your job is to go in and tag 10 of my Flickr pictures that you think are my *BEST* work. Yes, this is totally subjective. But that’s the way art works, right?

You in? Be sure that when you mark something as favorite, there is a way I can contact you (either via Twitter or Facebook). Questions? Ping me at @aaronstrout.